Sleepwalking is also known as Somnambulism in which a person started to get up and walk around during their state of sleep. This health issue is more common in children than adults and with age, it mostly goes off on its own. However, if someone develops this issue more frequently then they must consider the treatments to relieve sleepwalking.

It is a condition in which a person transit from his deep stage of sleeping to lighter or the awakening stage and remains unconscious about his current state. During sleepwalking the victim is unable to respond to any answer or even they talk something it usually doesn’t make any sense.

Also, the affected person doesn’t remember anything about the sleepwalking episode during the day time. The eyes of sleepwalkers remain wide open but they don’t feel anything about their surrounding. They do not stop their walk even someone calls them by their name or push them to stop.

The person gets a trigger for this concern out of different factors like over alcohol intake, usage of some medications, sleep deprivation, febrile illness etc. However in general sleepwalk is not connected with any underlying health issue or with any psychotic problem, still, if this issue is very frequent then it requires to be diagnosed to detect its real cause.

A major sleepwalking problem, especially in adults, reflects a critical underlying sleep disorder issue which can be dangerous too if proper treatment is not provided. Moreover, the affected person can harm themselves and pull them into danger if they are not controlled and restricted during their unconscious state of walking. 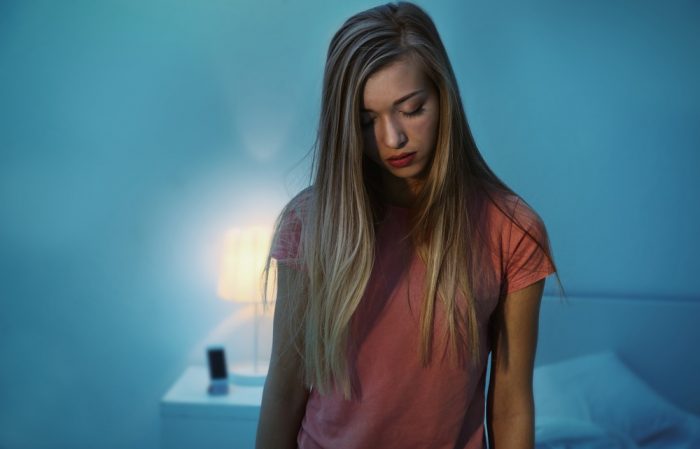 There are several factors and reasons that cause to develop sleep waking health issue both in children and adults. As the children grow with teenage this issue automatically disappears. However, in some cases, it stays in their adulthood too.

Though sleepwalking is generally doesn’t cause by an underlying health issue but a persistent sleepwalking issue needs a thorough diagnosis as it may generate as a side effect of some medications or of any other disease. Most commonly following causes are detected for triggering or developing sleep disorder trouble in people.

People who take excessive stress faces difficulty in sleeping properly and hardly get sound sleep. Often this stress factor makes them awaken during the night and causes them to walk and roam around the room. This they do unconsciously and forget about this sleepwalking event in the morning.

Sometimes high fever triggers the sleepwalking symptoms in people of all ages including children and adults. When excessive fever reaches the brain it can cause brain fog which ends with walking, running and even hard trying to escape from their place.

Sleep deprivation is considered as the common triggering factor for sleepwalking in which affected person develops temporary mental confusion in the lack of sleep in which they walk unresponsively.

Disruptions in sleep schedule due to a long time traveling, irregular work schedule in the office or due to any personal reason causes to develop sleepwalking issue in which victim walks and run unconsciously.

Certain underlying issues that cause sleep disorder issue develops abnormal breathing pattern during the sleeping time in nights such as Obstructive sleep apnea. Under such conditions, the affected person gets restless sleep and started to walk and roam around their room.

Gastroesophageal reflux disease or acid reflux is a condition in which a person regurgitates already swallowed foods and liquid from the stomach to the food pipes. This condition often triggers the sleeping disorder symptoms in its patients.

Consumption of certain medications triggers the sleepwalking health issue as its side effects. For example medications for psychiatric disorders, drugs for promoting sleep like sedative or hypnotics, stimulant drugs for boosting activities, drugs for creating calming effects like minor tranquilizers, drugs for allergy like antihistamines etc.

Alcohol adductors often lose their mental balance due to intoxication and started to develop sleepwalking symptoms during the night.

Restless leg syndrome is a condition in which affected person feel an uncomfortable sensation in legs and even sometimes in their arms and other body parts. This causes uncontrollable pressure to move legs for relieving this sensation. As a result of it, they often started to walk during night unconsciously.

For treating sleepwalking health issue there is no fixed treatment. However, as per the individualized case scenario, a doctor decides a different technique for reliving and controlling the frequency of sleepwalking so that the dangers caused by sleepwalking can be avoided and prevented.

This issue is very common among children and mostly it doesn’t cause any harm or danger to them. Apart from this it automatically disappears with their adolescence without any intervention of a treatment method. Still some percentage of sleepwalking health concern belongs to adult people also which hampers their normal living and proves dangerous too for them as well as for their family members.

The basic underlying reason behind the sleepwalking issue is considered as a bad or unhygienic sleeping habit and place. If this been the actual cause of this trouble in the life of any child or adult person then it can be tackled by improving the hygiene of the room in which they sleep.

In many cases, an underlying sleep deprivation issue is considered as the most usual cause of sleepwalking which needs complete treatment of that particular sleeping trouble. Apart from this some other health issue actively reflects its negative impact on your sleeping quality causing difficulty in deep and long hours sleep.

So you need to discuss every minute detail about your overall health and all the symptoms that you are facing in the episode of sleepwalking. This clear discussion will help the pediatrician or doctors to determine the real cause behind your inability to get deep and long hours of sleep and for developing different symptoms of sleepwalking.

In some cases, the usage of some medications too can cause a person to develop the sleepwalking health issue. So it’s better than before taking any new medication you should always ask your doctor about all possible side effects.

If any medication is found responsible for the sleepwalking concern in children or adults then it’s better to replace that medicine with some other medicine to get relieved from this frequent trouble generated out of sleepwalking.

Sleepwalking can be very dangerous as in the episode of walking in an unconscious state the victim can harm themselves if any sharp or heavy thing comes in their way of the nighttime walk. So to prevent such dangerous effect the family members of the victim should remain very cautious.

For this, the parents and other family members should ensure that any sharp device like a knife, scissors etc. is not kept around the bed. Also, make sure that window and door of the room in which sleepwalkers stay during the night are locked properly so that there will be no tension of escaping outside the home which can give an invitation to a major accident and any other undesirable incident.

As a common treatment technique to relieve the symptoms of sleepwalking some medications are prescribed by the doctors which helps to improve the quality of sleep by increasing sleeping schedule or time. Also, hypnosis therapy is another popular method of treatment for the patient of sleepwalking including children and adults too.

Medications such as Benzodiazepines and antidepressants, for example, Estazolam (ProSom), Trazodone (Desyrel) etc. are found to be very effective in reducing and eliminating the symptoms of sleepwalking. Medications like Clonazepam (Klonopin), and diazepam (Valium) are particularly used for treating sleepwalking concern.

Benzodiazepines and antidepressants medications are primarily prescribed for anxiety and stress concerns but as these two factors (anxiety, stress) are one of the triggering factors for sleepwalking so it helps proactively to combat the all different symptoms of this health issue with the continuous consumption of 3 to 5 weeks.

After that, if the frequency of sleepwalking episode is remarkably reduced then doctors stop to prescribe it further. However in some cases after sudden stopping the consumption of these medications the sleepwalking episodes started to develop again infrequently which further requires to be discussed with the doctor.

As per the causes and special circumstances of a sleepwalker hypnosis therapy is applied by the doctors to ease the symptoms of sleepwalking. This involves developing calmness and peace in the mind of sleepwalkers so that they can sleep easily on the time and can continue with it for more than the usual duration of time during the night.

Some other treatment techniques which are helpful in treating sleepwalking concern includes mental imagery technique, relaxation technique, anticipatory awakening technique etc. These techniques are usually applied in the cases of long term treatment of the sleepwalking disorder.

Out of these special techniques, under the anticipatory awakening technique, the affected person is awakened before a few minutes of the actual time of the sleepwalking episode. The parents can easily get aware of their usual time of sleepwalking by noticing their awakening time during nights and take this action to protect their children from danger.

The patient should be kept awake until the full episode of sleepwalking that they usually follow in general previously. In general, the sleeping episode lies between 15 to 20 minutes not more than that. While taking relaxation and mental imagery techniques the patient’s family members should ensure that it is only taken under the supervision of a professional hypnotist or therapist.

Though sleepwalking is not a major health issue especially if it is developed in childhood still if its frequency doesn’t reduce with aging then it can be a serious concern which should be controlled through the help of treatments to relieve sleepwalking from an experienced doctor and therapist.

This site uses Akismet to reduce spam. Learn how your comment data is processed.